On Sunday October 16 last year, at around 7pm, The Beloved and I landed at JFK in New York City after nearly a full 24 hours of travelling.  We collected our bags, grabbed a cab, went to our hotel, had a much anticipated shower, donned clean clothes and went straight back out the door and made a beeline for 163 First Ave in the East Village.  The destination:  Momofuku Ko.  The much talked about 2 Michelin star, 12 seat restaurant in the David Chang stable.  Two years ago when we were last in NYC we missed out on dining here thanks to Ko’s reputation still being white hot and the online reservation system being nearly impenetrable.  This time we were luckier.

Ko is a great experience and takes the open kitchen concept to a whole new level.  Sitting at the bar you can see everything that goes on as the chefs (there were four on the night we went) prepare your dishes.  Most are happy to chat to you as they go about their work, but there is still a hint of “too cool to talk”, which was a pity because with no written menu and no phones or cameras allowed I needed all the help I could get to remember the details of the dishes we ate.  I tried to scribble them down when we returned to our hotel, but I think being full of food and wine and the onset of jetlag may have conspired against me.  Highlights include the raw flounder with black bean puree, chilli and coriander cress, an oxtail consommé with daikon tortellini and oxtail meat, hand cut pasta with snail and chicken sausage, chicken skin and pecorino and a smoked egg with caviar and sous vide onion covered in a cloud of microplaned fois gras.  Just as interesting as the food was the beverage match for each course which ranged from a plum gin sourced  from upstate New York, to a rare sake to a particularly herbaceous local beer, to champagne.  In all, an excellent way to kick off our food adventures in this diverse city. 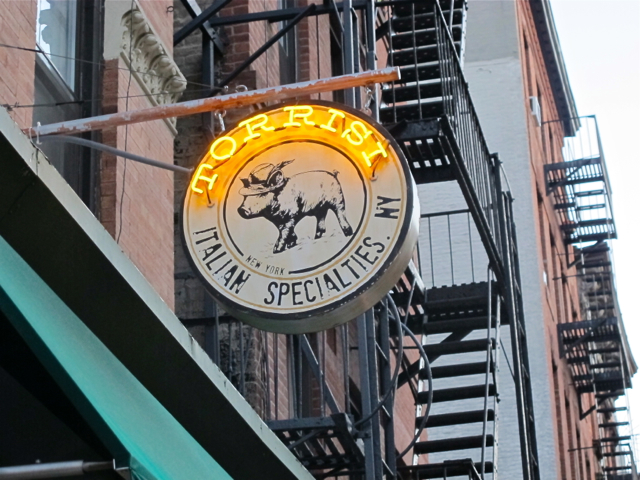 The following night, after an enjoyable but not strenuous day walking around the city, our destination was another small eatery:  Torrisi Italian Specialties.  Deli by day and unashamedly Italian-American restaurant by night, this little gem takes no bookings and offers only a seven course prix fixe menu.  At a mere $50 when we went, it was a bargain.  The menu changes daily and follows the Italian tradition of antipasti, then pasta, followed by a protein of some sort and finishing with something sweet.  It is not simple fare though, the technical skill and creativity is unmistakeable.  I still clearly remember what we started with: warm, just made mozzarella sprinkled with salt and drizzled with olive oil that we happily smeared on the rich garlic toast that accompanied it. 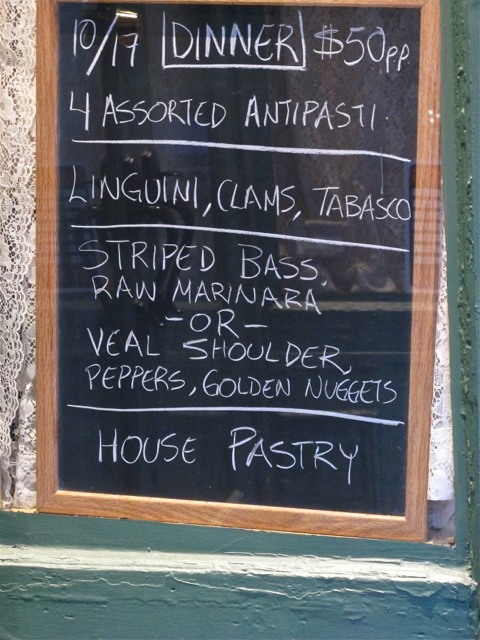 These were easily two of the best eating experiences we had in New York, so it is easy to understand that I was rather excited to see that David Chang and the boys from Torrisi (Mario Carbone and Rich Torrisi) were joining forces for a dinner at MoVida as part of the Melbourne Food and Wine Festival.  The chefs, when they weren’t actually in the kitchen, were generous with their time talking to the lucky diners who came to enjoy the seven courses with matched wines.  They spoke of how exciting it was to have access to ingredients they had never before cooked with – seafood in particular with eel and marron given as examples.  The menu for the dinner wasn’t finalised until that day after the chefs, with Frank Camorra accompanying them, visited the markets.  During the brief chat I had with Mario and Rich they were blown away that there was someone present at the dinner who had eaten at their restaurant.  They had seen themselves as “David’s support act”.

Here is what we ate.  I would happily eat the entire menu again.  I thought it was a little obvious for Chang to include his steamed pork buns, which he readily acknowledged.  Adding that they are so well known that it is a damned if you do damned if you don’t situation. 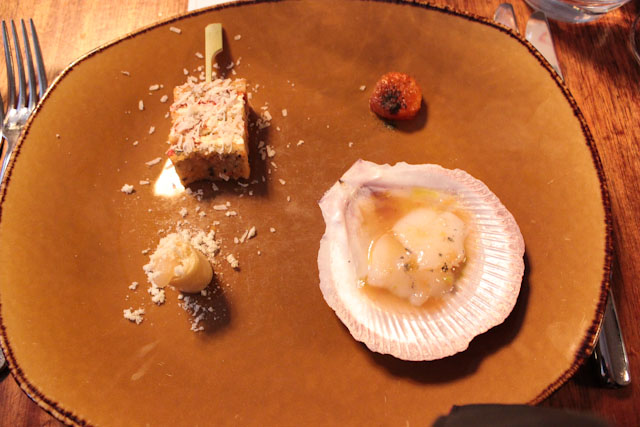 The eel was turned into a mousse, piped into beautifully crisp brik pastry and dusted with freeze dried apple – amazing. 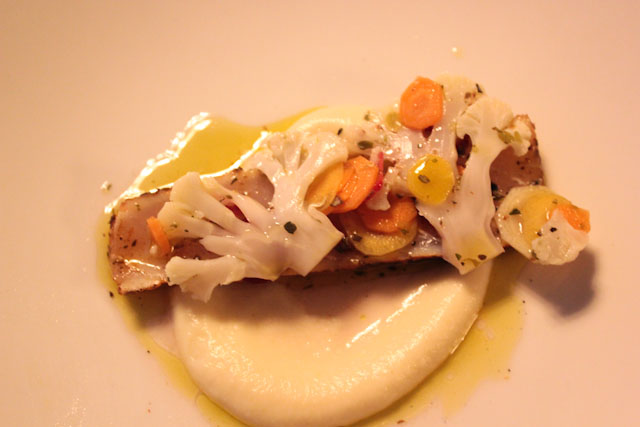 This dish was all about texture 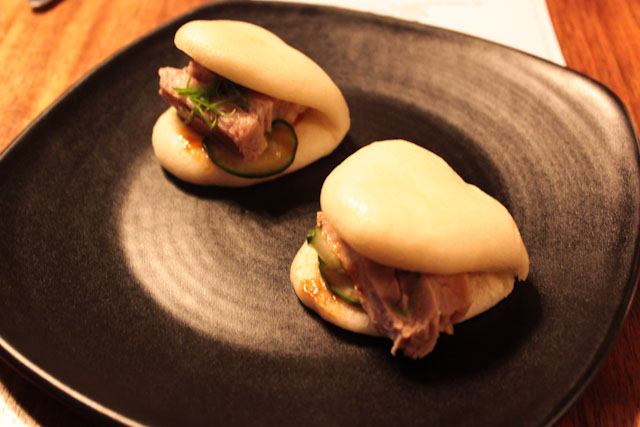 Yes, they are good! 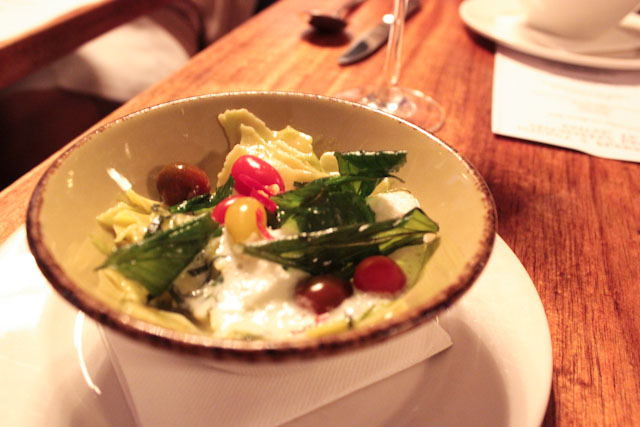 Possibly my favourite of the night – I want to work out how to make this at home. 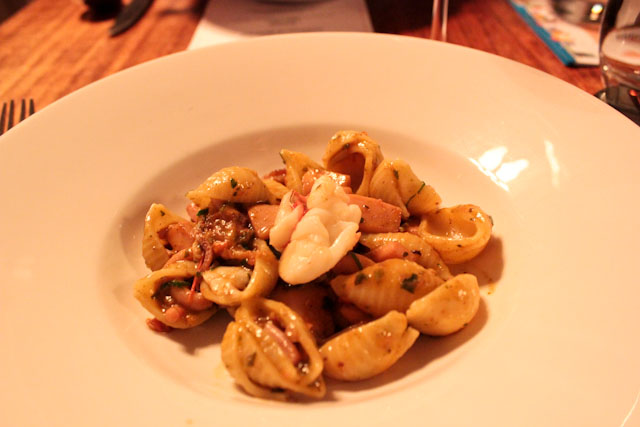 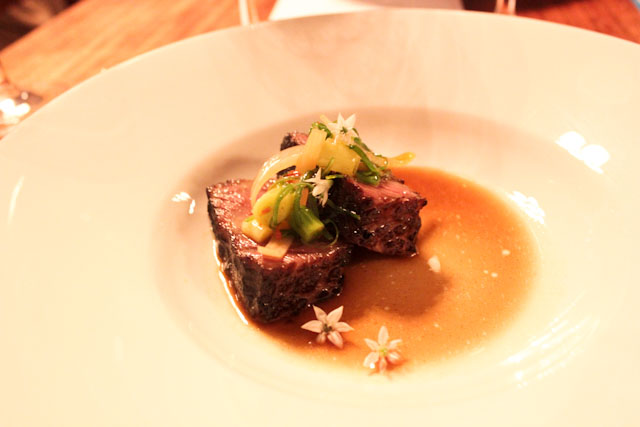 All ribs should be as good as these 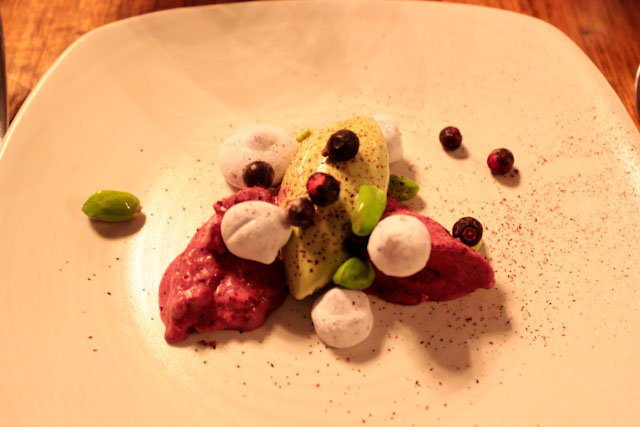 It was a good day for Melbourne when these guys came to town.   I love Melbourne’s food and restaurants and believe we easily hold our own on the world stage, but we can only grow when we get exposure to talent like this through events such as the  Melbourne Food and Wine Festival.

If you are lucky enough to get to New York – visit their restaurants.  Chang has many (Ko, Ssam, Noodle Bar, Milk Bar) and Carbone and Torrisi have opened their second venture Parm.  It is essentially an extended version of what they used to do at Torrisi Italian Specialties at lunch – taking lunch standards and making them heroes.  I will be back for the meatball parmigiana hero – from what I hear its not to be missed.  The original site on Mulberry St now focuses solely on Prix Fixe menus.  Joining the home style menu that we enjoyed is a 20 course, reservations only “chefs’ tasting menu”.  At $125 that sounds like a tasting menu I need to try.