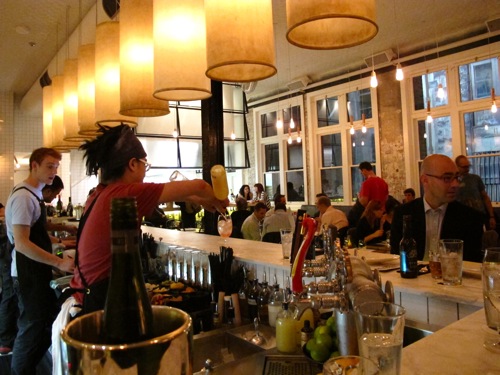 There’s always a moment of hesitation when first going to a restaurant that has had a lot of hype.  Will it live up to expectations and deliver or has the momentum and chatter in both mainstream and social media gotten ahead of the reality?  The spotlight is never on more keenly than when said restaurant boasts some well known and well regarded names.  In the case of Chin Chin the names and the hype deliver.

Andrew Gimber – the former head chef of Jimmy Liks in Sydney, who was lured south for this venture and earned his “modern Thai” stripes with David Thompson, Neil Perry and Christine Manfield

Ben Cooper – been doing great things at the pans at St Ali, Nobu and Ezard

A mostly Thai but veering towards pan-asian restaurant that delivers red hot food, with flavour and without fuss, in stylish and quintessentially ‘Melbourne’ surrounds.

Chin Chin occupies a large space, but the former site of the infamous Icon nightclub (where the bar was set alight and more than your average amount of mayhem occured) manages to feel intimate rather than vast thanks in no small part to the fit-out by Projects of Imagination (who are as hot right now as Chin Chin’s Nahm Prik when it comes to the world of restaurant design).  As is becoming the Melbourne way, there is a no bookings policy, unless you are a FOCL (Friend of Chris Lucas).  So come early or be prepared to snack at the bar and wait it out.  Arriving directly from work, but without the final member of our dining quartet, we did both.   It was amazing to look up from our conversation and see the restaurant fill so quickly – a bit like watching time delay photography sped up. 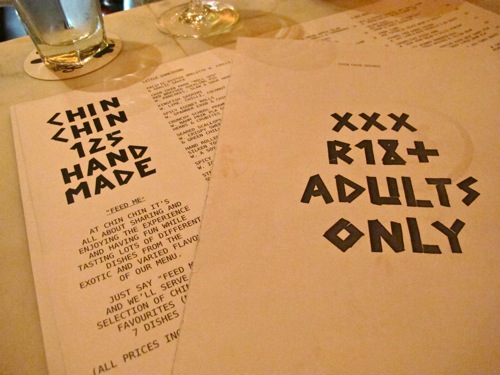 The casual menu is designed to share and won’t scare your wallet.  There is a lot to choose from so if you’re not into making decisions, just say “Feed Me” and you will get 7 Chin Chin favourites.

We started with Crunchy School Prawns with Nahm Plik Pla Gapi, Herbs and Crudites $9. Perfect bar food and destined to become a personal favourite.  The last time time I really loved school prawns was at Cumulus, but I think these may be even better, the nahm prik is something special and is beautifully balanced. 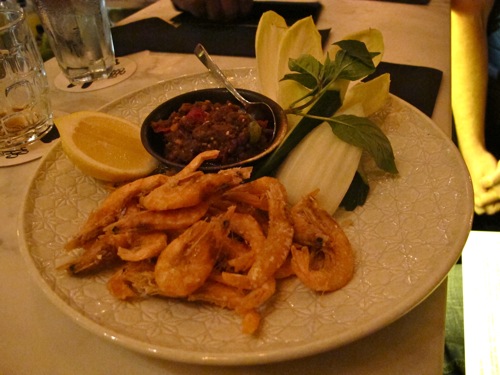 Then it was on to the Chin Chin Pork “Roll Ups” – red braised suckling pig with pancakes, slaw and sour herbs $16. This dish had me at “suckling pig” and I didn’t look back. 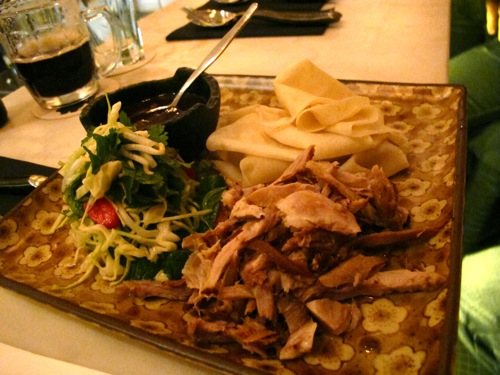 After enjoying these two at the bar we moved to our table which was a large shared table at the furthest end of the bar with a good view of the kitchen.  Unfortunately the occupation of the table by two parties confused a couple of the wait staff and there were dishes going in all directions.  This meant we missed out on the Spicy Corn and Coriander Fritters with Iceberg lettuce and chilli jam that I was keen to try.  The kitchen, slammed as it had been on so many evenings since the opening, had run out.  The not confused staff stepped in and quickly replaced them with Steamed Dumplings of Chicken Sweet Corn & Shiitake with Spring Onion and Ginger Dressing $11. They were nice but without the wow of the other dishes. 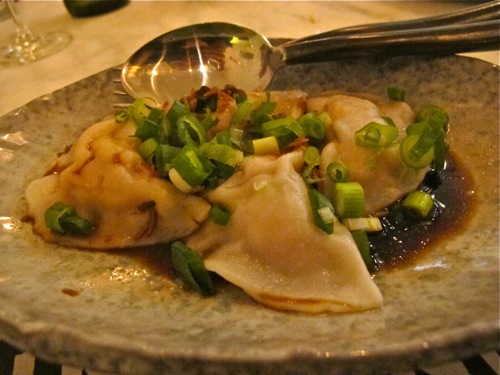 From the Green Stuff section of the menu we had Steamed Spanner Crab & Chicken Salad with Ruby Red Grapefruit, Coconut & fragrant herbs $23.  I would have been happy to have all of this to myself, but was reminded that we were sharing! 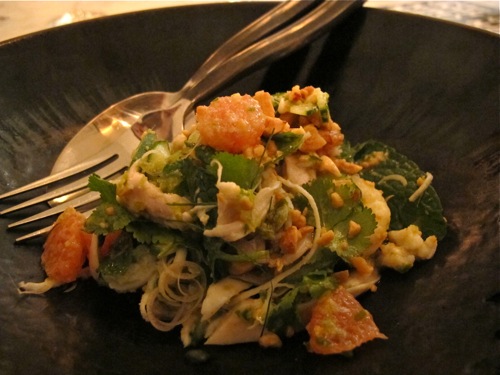 It was difficult to decide what to have from the more substantial sections of the menu.  We didn’t have a curry (only because I couldn’t make up my mind which one) but they will be on the hit list when I return.  From the Barbecue section we had Wild Barramundi wrapped in banana leaf with coconut red curry, lime and thai basil $22.  I really like barramundi and this was cooked to perfection and had a nice balance of sweetness from the coconut and zing from the herbs, 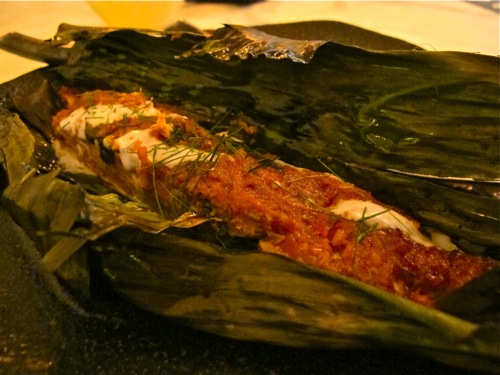 Turning to A Bit More on the menu we wrapped up the savoury section of our meal with Wild Boar, Stir Fried w Red Curry Paste, Snake Beans, Ginger and Basil $25.  I know that’s two red curries in a row, which was not intentional, however the difference in protein and cooking style made for two very different dishes.  The boar was really nice.  The last time I had it was in a slow cooked Italian ragu so I was curious to see how it went here in a stir fry.  The gamey flavour was evident but not over powering.  Overall a nice dish. 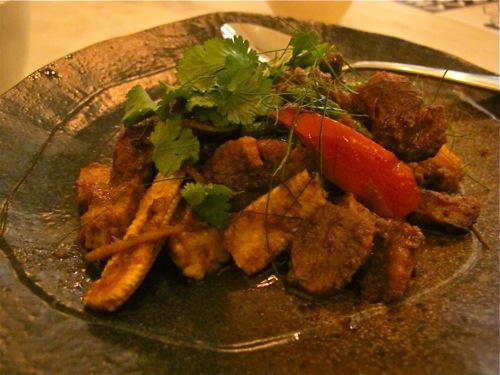 The sweet tooths amongst us were keen to try the Grilled Banana Roti bread with sweetened condensed milk and cinnamon sugar $12, but alas!  It was also sold out.  It was later suggested to me on Twitter that this dish is becoming quite popular and you may need to be a FOAG (Friend of Andrew Gimber) to ensure you don’t miss out!

It is worth mentioning that the wine list is all Australian and that the house wine has been exclusively made for Chin Chin by Yabby Lake winemaker Tom Carson.  I would have happily tried this, but couldn’t go past the Goaty Hill Riesling that dear friends of mine produce.

Chin Chin is fun.  It’s a great place to eat with friends, particularly friends who like food.  The atmosphere is right, the food is right, the staff (forgiven the few hicoughs we encountered) are right and it feels like just what Melbourne needs.