It’s been a busy year for Benjamin Cooper, Executive Chef for the Lucas Group (Chin Chin, Baby Pizza, Kong).  Known equally well for his fiery Asian food as for his trademark mohawk, he has just turned 40, masterminded big changes to the menus at both Chin Chin and Kong, all whilst also preparing for the opening of the latest Lucas venture, Hawker Hall.

“It’s been 2 years in the making,’ said Cooper, “since the initial ideas were discussed and the first menu draft. And it’s come a long way since then. In January when Damian came on board, I took a step back to let him put his stamp on things. The final menu is a mixture of the two of us. I have tweaked a few things on some of his dishes, and he has made some little changes to some of mine”.

Having been fed from several of his kitchens over the past few years, we think Damian Snell (Ba Charlie, Orient East, Claremont Tonic, Dandelion) with his strong South East Asian pedigree and evident passion for the food seems a perfect fit for this venture and for the Group.

The menu boasts almost 70 dishes and is broken into 12 sections.  The first is Beer Food, but we’ll get to it later.  Here’s a highlights tour:

Dumplings and Buns – we loved the pan fried rolled dumpling of ox tail.

Salads – we tried the Rojak, a raw vegetables, fruit and tofu salad but want to come back for the five spiced shredded chicken with toasted coconut.

Noodles – the ‘CKT’ Char Kway Teow with prawns, lup cheong and smoky soy was a reminder that Damian knows his CKT. He served some excellent variations at Orient East.

Rice – the options in this section wander through several countries’ cuisines so it’s likely there’ll be something that tempts your taste buds. We’ll go back for the wok tossed pipis and sambal belachanwith fried brown rice.

Coconut BBQ Pit – Do not pass up the lovely sticky red Char Siu Pork. It’s smells divine and tastes even better. Oh, and it comes with Bok Choy.

Curries – another journey around the region for this section’s offering. We loved a fragrant curry of chickpeas and vegetables with cumin yoghurt.

Stir Fry – The Beef and Black Bean with rice noodles and sesame is everything that the takeaway dish from the suburban Chinese restaurants of your childhood wished it was. 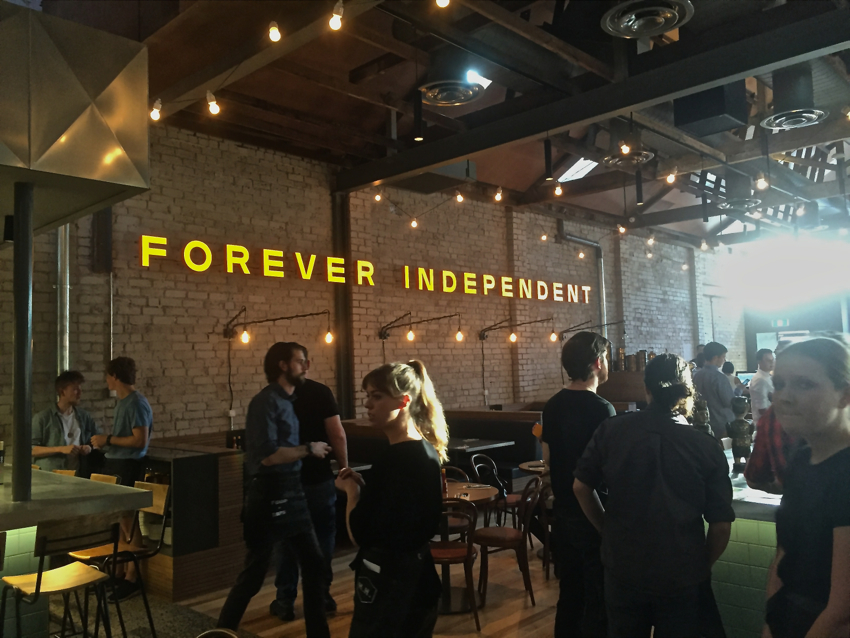 Back to the Beer Food, and the beers.

The Beer Food is the kind of stuff you’ll happily snack on whilst working your way the impressive beer list. There are 13 tap beers, 16 bottled/canned beers and three feature taps. We tried the Malay Vegetable Spring Rolls with green chilli soy and thought that the pepper was a little too dominant. Perhaps we needed another beer to balance them out.

Hawker Hall is serious about the beer. The front half of the room is lined on one side with the bar and it’s multitude of taps. They will rotate through smaller craft beers from Australia and Asia. On the opposite wall, in bright yellow neon, is their credo when it comes to this amber fluid  “Forever Independent”

“No contracts, just beers that we believe in. Beers that are fresh, brewed with love, and most importantly, brewed to be enjoyed with our hawker food.” 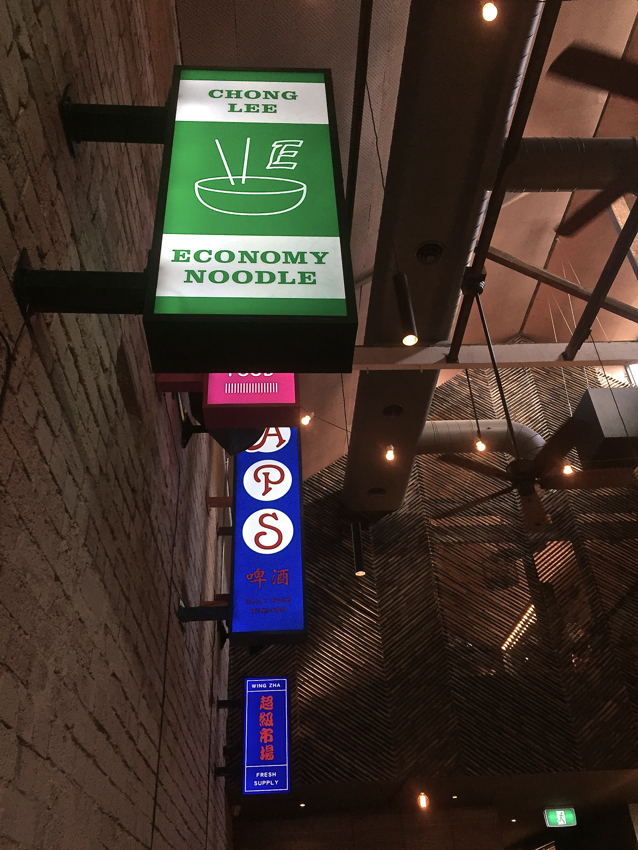 The building was originally a turn of the century horse stable and more recently a furniture store. A collaboration between Craig Tan Archtitects and interior design team Eades and Bergman has brought out the original roof trusses and exposed brick walls and created a modern Melbourne version of a hawker market. It seats 164 and doesn’t take bookings so go prepared.

Hawker Hall is big, bold and boisterous – just as you’d expect a Hawker Market to be – and it’s going to be your new favourite south side destination for South-East Asian fare.

Hawker Hall is at 98 Chapel Street Windsor and is open from 11am until late.