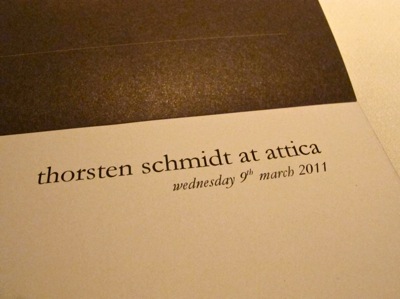 The days are still sunny and warm but the nights a little cooler.  March brings with it heralds the arrival of autumn and with it some of my favourite things: the first of the new season apples, green beans, perhaps some mushrooms and the Melbourne Food and Wine Festival.  One of the first events of the festival to sell out was the Thorsten Schmidt at Attica dinner.  Thanks to lots of calendar reminders which ensured I rang the moment it went on sale, I was one of the fortunate few to go to this amazing dinner.

A Nordic culinary sensation, Thorsten and his sous chef Jacob, teamed up with Ben Shewry and the eleven chefs at Attica to present dishes that were locally foraged (that morning by Ben and Thorsten), with a story to accompany each.  Speaking to us prior to the first course being served, Thorsten explained that his philosophy is to use modern and traditional techniques, experience and local produce to tell the story of the land, for it is nature and season that determines the what and when of food ready to be used.  The dinner took us on a journey through the Jutland region of his homeland.   Winter is drawing to an end in Jutland so our dining journey reflected the mood, light and terroir of this season. 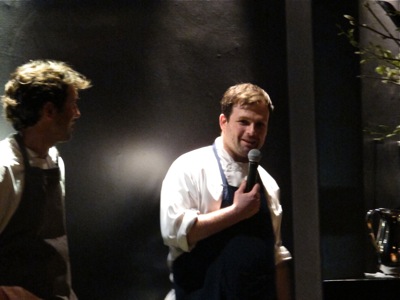 The thing that immediately struck me as the snacks were served, is the way in which Thorsten uses food as a form of communication and interaction.  Every element of each dish and it’s presentation and the adornments on the table are an integral part of the overall story and experience.  The first snack was a ‘potato chip’ dusted with saltberries from the morning’s foraging and served with a sour cream. 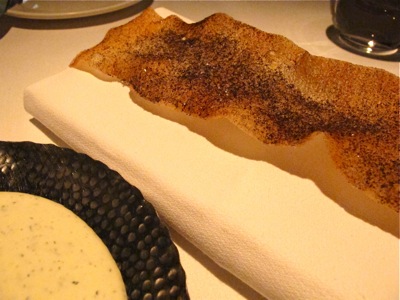 Following that was a nest of hay with warm, slightly smoked nuts. 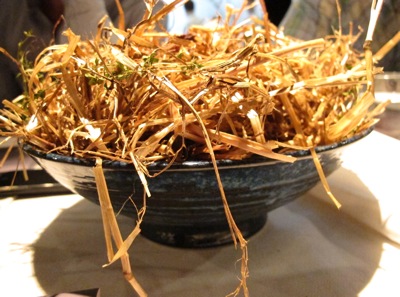 Guests had to do their own foraging to enjoy the offering. 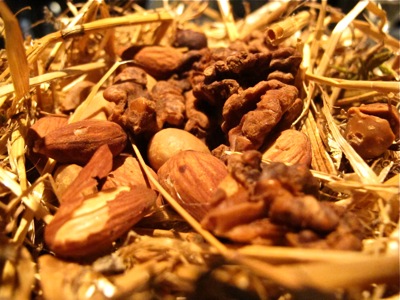 Our journey through Jutland started with the next course. The assembly, executed with expert precision by the small army of chefs, took place in the atrium at Attica which meant that I got to watch each stage since I was seated directly next to it.  Conversation from me was a bit stilted at this point, as my attention kept being drawn to the activity just through window. 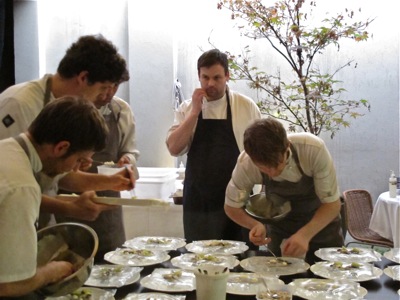 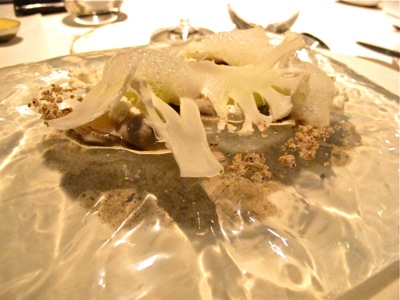 A water pouch provided the fjord. ‘Sand’ was cleverly placed underneath the fjord and atop.  Nearly all white in colour, it did remind me of winter.  But what of the taste?  Reading through the ingredients caused a few on my table to raise their eyebrows – oysters and fresh cheese?  With horseradish?  It was an inspired and beautifully balanced dish – I loved it.  Having fully recovered their condition after spawning the Coffin Bay oysters were delicate and sweet with a crisp salty taste.  The horseradish was not overpowering, only a subtle zing to offset the creaminess of the oyster.  I now understood the use of the phrase, “multi-sensory whiz bangery” by the Melbourne Food and Wine Festival Program Guide.  The airiness of the mussel foam, the granules of sand, the smoothness of the cheese, the movement of the fjord as you put your spoon in for the next mouthful. 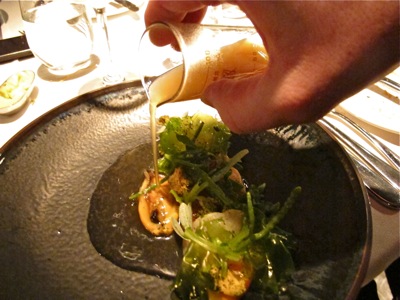 Thorsten and Ben went around each table to individually pour the sea over each guest’s seabed.  It was a completely unpretentious gesture that emphasised the experience. 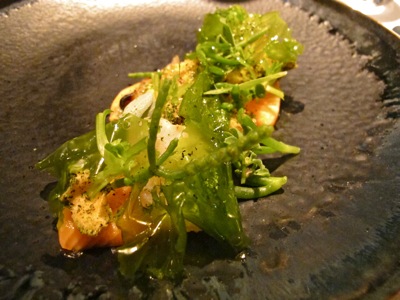 Another textural delight.  My favourite element of this dish was the ‘coral’.  I wasn’t able to uncover exactly how it is done.  My guess is that it was bread: dried and shaped and coloured and flavoured.

In essence, the most wonderful crouton I have ever had.

Prior to each course being served each table was dressed to suit.  For the Forest we received sprays of pine tree and miniature skillets with hot stones and flaming charcoal.  The placement of each new item encouraged more discussion and communication about the dish to come and again kept adding to the story that Thorsten was telling. 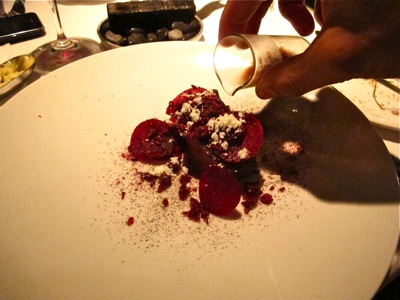 We were treated to more interaction as Thorsten and Ben again came around to personally pour over the sauce for the ‘rendyr’  Ben very kindly held this pose for me so that I could take the picture. 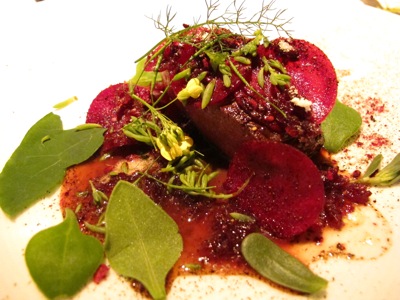 In the photo above you will see the two chefs happily and contently picking the herbs (more bounty from the foraging) for this dish.  They were then placed on the table so that we could add our own.  I didn’t get to find out what all of them were, but one of the interesting ones I remember was dune spinach. 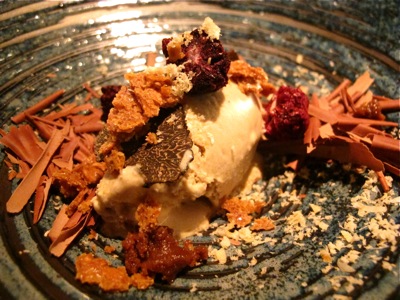 Yes.  I ate icecream made with fresh shaved wood.  And it was good.  No – it was great.  I could have had two of these, I am rarely enjoy desserts.  Thorsten had earlier explained that oak wood is prevalent in Jutland.  It was something that he had to incorporate into his cuisine because it is such a cultural and historical part of his nature. 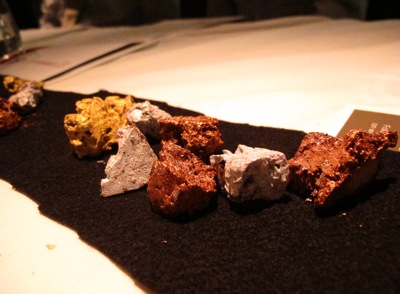 Aros is the old Danish name for the city of Aarhus, where you will find Thorsten’s restaurant.  It is also the name of the cutting edge art and architecture museum.  I am kicking myself for not bringing a notebook to the dinner because I cannot recall why Aros is represented by the beautiful metallic nuggets of chocolate.  Each was slightly different in taste.  All were superb.  The entire dinner was.  A truly wonderful culinary experience.